“What appeals to me about Wyman’s painting is the way she uses the canvas to explore the evocative properties of paint. It draws me in to an abstracted world of gridded lines, dots and circles that create the illusion of three-dimensional space.”

About the artwork
To create Untitled 2002, Jemima Wyman experimented with painting techniques that have since become characteristic of her practice. From her use of vibrant colour and focus on the materiality of paint, to her exaggerated sense of scale, Wyman encourages the viewer to enter her abstract world.1 As she explains, ‘if there was a dominant message that I was trying to communicate . . . it would be the experience of encountering the work physically.’2 In Untitled, Wyman achieves this immersive effect through her use of dripped gridded lines, dropped coloured dots and poured circular shapes, which together create an illusion of three-dimensional space. Her calculated arrangements direct the viewer’s gaze, which is not allowed to rest on any one area of the canvas. These formal elements register the influence of various artists on her practice. For example, Yayoi Kusama’s (1929–) expansive fields of polka dots, which allude to infinity and explore the interplay between cognitive and physical experiences, Bridget Riley’s (1931–) Op Art, and paintings by Aboriginal artists from the Central and Western Deserts.3 Wyman’s Untitled 2002 is one of a group of works generously donated by Michael Eliadis in 2014 to The University of Queensland through the Australian Government’s Cultural Gifts Program.

About the artist
Jemima Wyman works across painting, performance, photography, and installation, to create work that invites audience engagement with pattern and colour. She frequently constructs a participatory space for viewers to experience the optical affect of her work, reflecting her interest in the collective social function of pattern and camouflage. Born in Sydney in 1977, Wyman studied visual arts at the Queensland University of Technology (1997–2001), and received a Masters of Fine Arts from the California Institute of the Arts in 2007. Her solo exhibitions include Tactical frivolity, Milani Gallery, Brisbane (2015), Pattern bandits, Queensland Gallery of Modern Art | Gallery of Modern Art, Brisbane (2014), Effacing power, Steve Turner Contemporary, Los Angeles (2013), and The declaration of resemblance and fluid insurgents, Institute of Modern Art, Brisbane (2009). 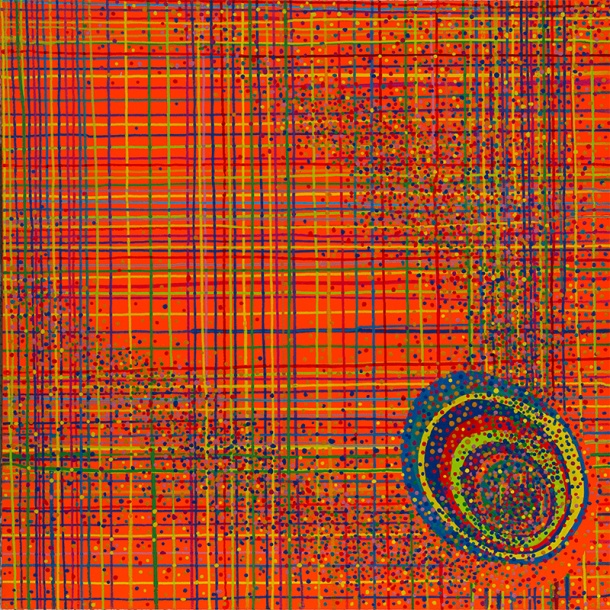